Using the Properties tab on the right panel, you can change the properties of the video element.

While manually entering the values for positioning, you cannot enter decimal values.

Height and Width: You can resize the video element by dragging the corner handles of the video. Alternatively, you can enter the size of the video on the size fields.

While manually entering the values for resizing, you cannot enter decimal values.

Select lock to keep the aspect ratio locked when resizing the video.

Rotation: You can rotate the video by using the rotate lever or entering the value in the angle field.

The angle field displays values from 0 to 360 when the icon is rotated. While using the rotation feature to animate the video, values must be entered in multiples of 360 to signify how many times the rotation must happen.

Opacity: You can change the opacity of the video by dragging the slider.

Replace: Displays the properties of the video that you have added to the workspace. You can replace the video by clicking Replace and selecting a video from the assets library.

Keep initial state as hidden: Upon page load, keeps the video hidden until a configured action is not performed. You can configure the action on the Events tab.

Video Controls: As a designer decide how and when your customers will see the control options for a video that is rendered.

The following three options are available for visibility of video controls: 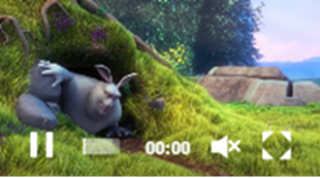 Show only on Hover (desktop)

Poster Image for Video: Poster Image is the image that is shown before a creative is rendered. Canvas 2.0 allows you to configure the start card by selecting the default image or you can select any custom image as the poster image for your video.

You can select from the following two options:

At the End of Video: This feature allows you to select what is displayed at the end of the video.

Other Options: Other options allow you to control how the video ends. You can select from the following two options:

Position of the Video: Position refers to the position of the video on the workspace. Pinning an video to an edge instructs that element to move as the edge itself moves. When an element is pinned to non-opposing edges on the workspace, the distance of the element from those edges of workspace remains fixed or proportional.

You can define the position of the video as Float or Fixed.

To change the dimension of the video in the rendered creative, perform the following: